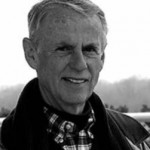 On the occasion of his acceptance of OHMAR’s
Forrest Pogue Award
at OHMAR’s 2009 Spring Conference & Meeting
in Washington, DC

Below is an abridged version of Dr. Williams remarks following the presentation.

Thank you to OHMAR & my colleagues.  It is a great honor to be recognized by your peers and I accept the Pogue Award with pride and gratitude.

Boy, after all those years of sitting listening to other people talk about themselves, now, finally, here’s my golden opportunity to turn the tables!  Well, we’re in the business of looking back so I did some of that on myself and was surprised to find—despite several starts and stops and questionable detours—that some pretty strong through lines existed in my life that led to what has been the primary focus and joy of my professional life for the past almost 25 years: doing oral history.

I am going to ask you to indulge me for a few minutes as I trace a few of those lines for you.  And the first one to come to me was a surprise when I thought of it!  A connection actually between me and Forrest Pogue.

In the early 1950s it must have been, my father and I rented an audio recorder for the fun of recording our own voices and hearing them replayed …. but what we rented in those days was a wire recorder …. the predecessor to tape recorders … a dreadful beast of a contraption, but probably just like the one Forrest Pogue used to interview soldiers during World War II.  Let me tell you, wire recorders were no fun.  It was so easy for the wire to spool off the wheels of the machine and make a horrendous, jumbled mess.  No fun at all to untangle.  And as for sound quality?  Not very good but good enough to generate a transcript.  Technology has come a long way, I’m happy to say, since those early days when oral history was a-borning in the skillful hands of Forrest Pogue and today’s sound quality and ease of equipment operation are miracles compared with what the pioneers in oral history had to contend with.

In junior high school my weekday mornings began by tuning in the San Francisco CBS radio station, KCBS, at 7 to hear first the news but at 7:15 my favorite program came on: This is San Francisco with Jim Grady . . . . a 15-minute program during which Jim Grady told local interest stories and included short interviews with mostly common folks doing interesting things in the Bay Area.  The only segment I remember distinctly now of the hundreds I must have heard was an interview with a man who espaliered a climbing rose bush into the shape of the numbers of each calendar year . . .  1950, 1951, and so forth on the wall of a building on one of the popular commute routes into the central city.  I loved this simple, straightforward, human interest program.  So much so that I steeled my courage and asked to meet with Jim Grady at the station.  And that actually happened.  A real thrill for me probably at the age of 13.  And Jim talked about and encouraged me to think about a career in radio.  Not quite the career path I took but almost . . . with the same interest in the human experience that my hero, Jim Grady, explored on a daily basis.  A sad footnote to history: . . . . “Jim Grady,” a radio name not really his own, somehow got caught up in the anti-communist scares of the early 1950s and lost his radio job and his program disappeared from the air.  The last I heard of him, he was working as a dishwasher in a Berkeley restaurant.  A sad ending for a good man.

My mother used to really frustrate me.  She and my father enjoyed entertaining guests.  But when I got old enough to notice, at the dinner table my mother always asked guests about their lives and rarely, if ever, talked about her own.  She was, I came to realize, a keen listener and a very good, empathetic interviewer but I remember asking her once, Why don’t you ever talk about yourself.  I don’t recall her answer.  I doubt she really realized she did this.  But what I was getting from her without really knowing it at the time were the skills necessary to be a good listener and interviewer.  Ask the question; shut up; listen carefully; prep a follow up question, if necessary; and show appreciation for what people say.  All great stuff and great training.  Now the record would be incomplete if I did not go on to say that my mother could be critical as all get-out about guests once the front door closed behind them.  Al, I can hear her say to my father, can you imagine what that stupid woman actually said?  Not, of course, that oral historians ever do that!

Sometime in the early 1960s I conducted my first oral history interview although at the time I didn’t know that was what I was doing!  It was an interview recorded on a lousy little reel-to-reel recorder that only held tiny spools of tape 7.5 minutes in length, I think, in each direction.  But my interviewee was my grandmother who was living in San Francisco and 8 months pregnant with my father when the great earthquake of 1906 occurred.  Despite the fact my grandmother’s life stretched from before the coming of the automobile to men on the moon, the 1906 earthquake was the highlight of her life because, of course, of its immediate and personal impact on her life.  My grandmother’s recollections were stirring and as I listened to the recording recently I have to admit I conducted a pretty good interview, helping her recreate in words what it was like to have your world tumbling around about you and then going up in flames.  That interview occupies a special place in our family archives.

It’s time to fast forward!   I spent a couple of years teaching high school (never worked harder in my life) and got a master’s degree in what was called Broadcast Communication Arts at San Francisco State University where I studied under one of the greatest professors I ever had, Dr. Herbert Zettl, who taught, gasp!, that television can be a bona fide aesthetic medium.  And his book Sight-Sound-Motion explained how that is so.

It will surprise some of you to know that for a brief time I was the nation’s academic expert on how networks shot National Football League games.  The subject of my PhD dissertation at Northwestern University.

You see the through lines here coalescing around media and people.  And then, after years of sneaking peaks from time to time in the Oral History Review because something just made me want to do it, something triggered me, probably a newspaper article, to call Martha Ross, our own local guru of oral history, and during our conversation she invited me to an upcoming OHMAR meeting to be held at the Hagley Museum in Delaware.  It was a grey and raining day in 1986 when I drove up to Wilmington and attended the afternoon sessions of my first OHMAR meeting.  And guess what …. I really liked these people!  I’d been used to attending academic conferences in my college teaching days after receiving my PhD and they could be pretty brutal, competitive affairs.  But OHMAR folks could be both intellectually interesting and challenging and personable and friendly at the same time.  The kind of people I like being around.

Not long after my Hagley experience, I presented a workshop on doing videohistory …. a brand new term at the time …. at the Montgomery County, Maryland, Library.  It so happened that Pamela Henson of the Smithsonian Archives and David DeVorkin of the Air and Space Museum attended because they had recently received a grant from the Sloan Foundation to conduct a series of videohistories on contemporary science and technology.  That project resulted in at least 22 studies in the physical and biological sciences and technological design and manufacture.  I was lucky enough to be the video producer on a number of these studies and that allowed me to apply what I knew of media—and specifically video—to oral history and historical documentation.  A heady assignment that I relished.

As some of you know, I served as OHMAR’s vice president when Anne Ritchie was president.  Anne undertook a timely review of OHMAR’s structure and operations and brought the organization up-to-date. Factors that benefited me greatly when I served as president.  Getting to know both Anne and Don Ritchie was one of the special privileges of becoming part of the OHMAR community.  My proficiency at volleyball grew substantially at their annual summer gatherings and all of our interactions over the years have been a source of inspiration and pleasure.

In recent days, I have had the opportunity to direct an oral history project for the Robert J. Dole Institute of Politics at the University of Kansas which has resulted in the collection of over 60 interviews with Robert Dole, his senate colleagues, and staffers, journalists, and others connected to him and his times.  And that has led to my current, similar work: doing interviews for the George J. Mitchell Oral History Project for Senator Mitchell’s alma mater, Bowdoin College in Maine.  Though my far-left-leaning father would have had problems condoning aspects of this work, I take pride in having learned, as they say, to work both sides of the aisle.

As I have looked back I see that if I rode a crest in this field of ours it has been to look at the media as more than merely the recordings upon which the “real historical documents”—the transcripts—are based and to validate the recording itself as a document of at least equal value—a notion that should gain great credence now that we are in the age of the Internet, YouTubing, instant messaging, Tweeting, and whatever absolutely new avenue of communication is being invented and posted for the first time at this very moment.

So these have been some notes on my through lines: early instincts, good training, and the opportunity to realize what I always wanted to do even though, at several points along the way, I didn’t know that was actually what I was doing.  Thank you, OHMAR, for prompting me to take this look back at my own life and for your professional support and with this award, your validation of my work.